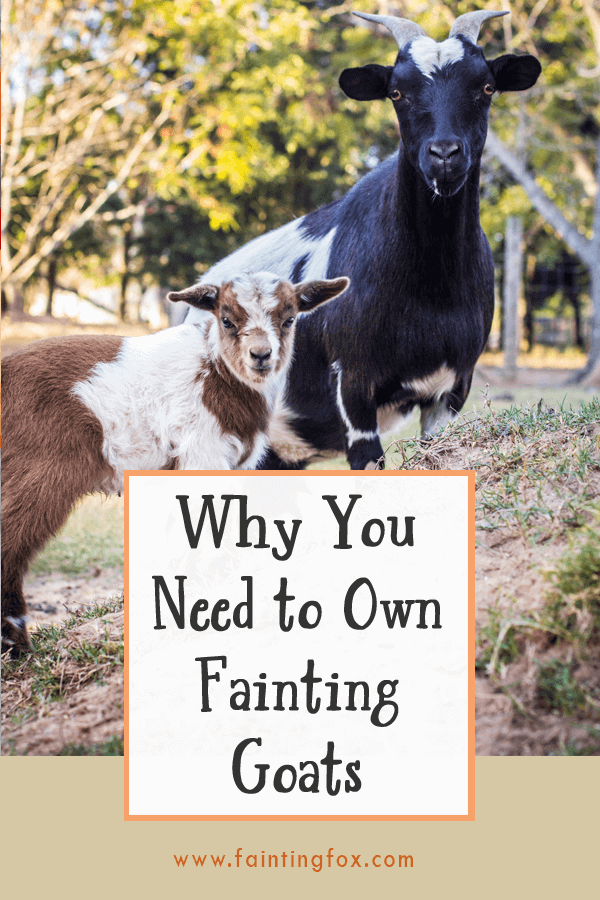 And you should definitely own some.

Our Fainting Goat Business began by accident, or maybe blind luck, although I freely admit to ‘falling’ for these amazing animals at first ‘faint’.

Have I mentioned we owned horses?  We did, for many years; and horses had been my hobby and passion for as long as I can remember. I had never owned goats, never thought much about them. And other than that they were seriously cute, I didn’t have any particular want to have them at our place. But my husband convinced me that a goat (one) would keep the fence rows clean and eat the weeds the horses wouldn’t touch. It was a good pasture management practice (and still is, although that’s not why we have goats now). Hubs wouldn’t have to spend valuable farm project time weed-eating fences. And y’all, I’m fully in support of anything that increases farm project time.

So I asked my sister-in-law, who has owned goats off and on over the years and thanks to her work with a local vet has some serious animal community connections, to find me a goat.

Sis-in-law called a couple of weekends later and said she had found an older gentleman in Bon Secour, Alabama with goats.  He had a herd of fainting goats he needed to sell.

Did I want to go pick one out?

I mean, yes we did want a goat, but…what the HECK was a fainting goat? Was it a normal goat? Did it have diseases? Was it even going to eat the weeds if it fainted?

Her laconic reply to my questions, “I don’t know, I guess it faints.”

Okay, so now curiosity was killing me and I had to see these ‘fainting’ goats. Definitely not committing to buy, but I HAD to see them. And so the expedition was planned – sis in law, hubs and I picked a weekend and headed south.

Upon our arrival at the farm in Bon Secour a gentleman in his late seventies met us at the car.  He was pleased as punch to show us his pets.  He expounded on the virtues of all things fainting goat as we took the short walk to his goat pen. There must have been thirty or forty goats, all ages, all colors. 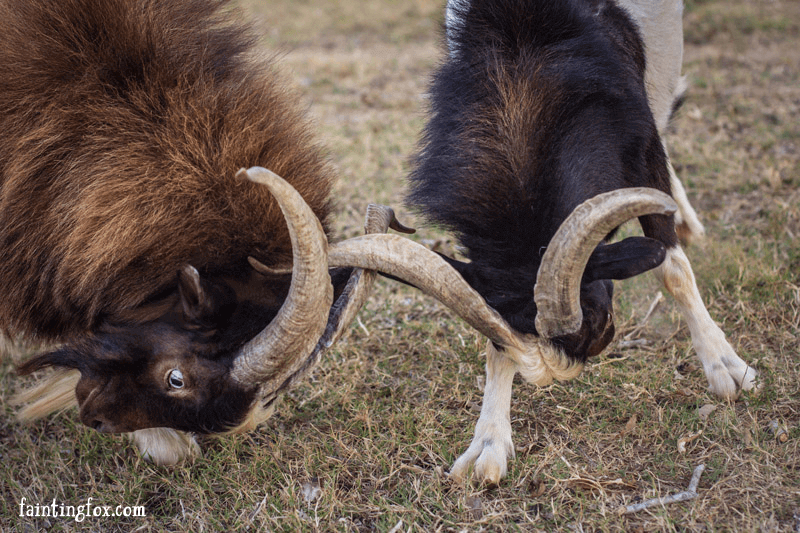 Maybe they were more colorful – black and white, white and brown, brown and black, red, tan spotted, striped, speckled. Okay, so a lot more colors than I had ever seen on goats (I thought all goats were white, white and red, or black and tan). They might have been a little shorter and stockier than the goats I had seen over the years. Weren’t they supposed to be taller and bonier? You know, all hip bones and udders?

Well, I may not have been a goat expert, but I could certainly tell that there was no fainting going on.

Not. one. single. goat was passed out anywhere.

Ugh, it had been a gimmick, there was nothing particularly special about these goats at all.  So, in my best no-nonsense, stop with the joke already, maybe he’s senile, tone of voice – I asked the gentleman,

‘Why do you call them fainting goats?’

Oh, the smile he smiled, mischief and joy all combined with a look of incredulity for this young’un, this whippersnapper who doubted him. And then he leapt. Not walked, not hopped, not made his way slowly; he leapt into that pen full of milling goats, smiling and hooting and shouting and clapping his hands.

And for that split second, that pause in between, all I could think was; ‘I knew it! I knew he was crazy!’

But the goats FAINTED!

They fell over, they locked up, they staggered away in a hippity hoppity sort of waddle! And all I could do was gape in astonishment and laugh.  Doubled over, can’t breathe for laughing, laugh. I laughed so hard I almost fainted myself. And the completely non-senile gentleman looked at me and grinned and said,

‘Now that’s why I call them fainting goats.’

We spent a couple of quality hours looking over the gentleman’s herd and talking with him as he explained about Tennessee Fainting Goats and their myotonic condition.  As we waded through the sea of goats (I couldn’t believe how friendly they were, even after being scared stiff) he told us about how he and his wife, whom he had lost just a few years before, had driven all the way to Tennessee and brought the first goats in his herd home.  He had raised them for years and was a huge enthusiast of the breed.

I ended up leaving that day with not just one, but three fainting goats. 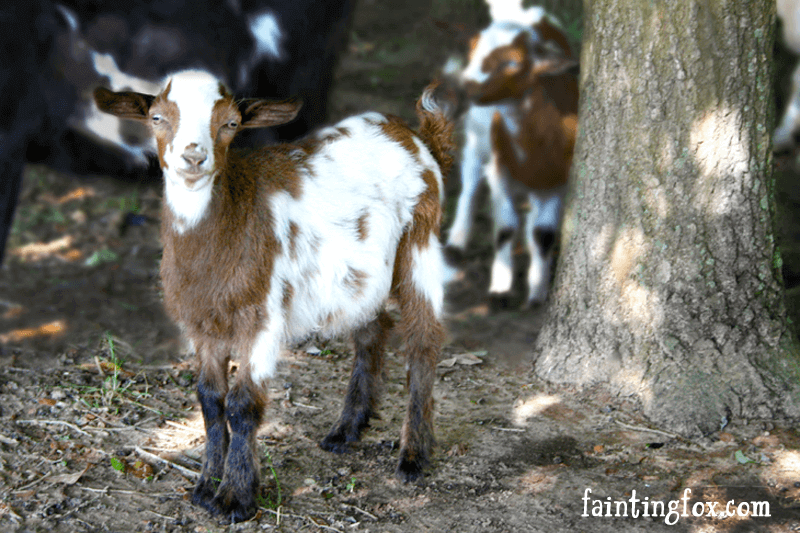 No doubt, I would have bought more, but sis in law in her laconic way announced that she should probably get a couple of goats too.  And our one goat pen was getting pretty crowded.

My appreciation for these amazing animals has only increased in the years since and in 2012 those first three goats became the foundation of my herd and the start of the business venture that is Fainting Fox Farm.

I have now owned Fainting Goats for almost 8 years and even today the goats continue to surprise me with their gentle, good willed natures, how easy they are to keep and their herd antics. We often sit on the porch and watch as they trail from one pasture to another. They are much more entertaining to watch than the horses.

(Notice I said watch, you cannot ride fainting goats. Just in case anyone was wondering.)

Spend a little time with a couple of fainting goats and I guarantee you will be as hooked as I am.

This error message is only visible to WordPress admins

I love it when you share, but if you do, please link back to the original post.
This site's content is for informational purposes only and Fainting Fox Farm or others associated with this site shall not be held liable for any damages incurred through the use of information provided in this blog. I am not a vet, information provided is from personal experience and study. It is not intended to replace professional veterinary or medical advice and it is your responsibility to seek appropriate medical and vet advice as needed.
This error message is only visible to WordPress admins