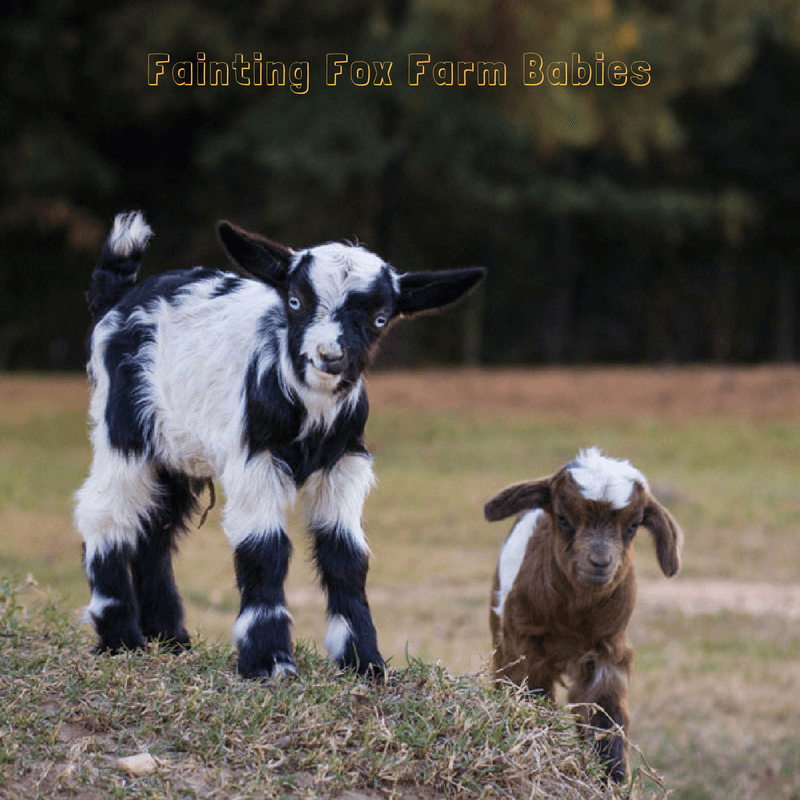 Whats in a Name?

The breed’s history traces back to the 1880s. The story goes that an itinerant farm laborer named John Tinsley came to central Tennessee, reputedly from Nova Scotia. Tinsley had with him four, unusual, stiff goats. Goats of this type gradually became known across the region. They were less apt to climb fences and escape from pastures than other goats, and their muscular conformation and high reproductive rate were also valued. Farmers began to appreciate them, and the numbers of “stiff,” “nervous,” or “fainting” goats increased. During the 1950s, some Tennessee Fainting goats made their way to the hill country of central Texas. They were further selected for meat qualities, including larger size, and became known as “Wooden Leg” goats. –American Livestock Breeds Conservancy.  The American Livestock Breeds Conservancy lists the Tennessee Fainting Goat on their recovering list.

Tennessee Fainting goats come in a variety of colors and sizes, although a black and white coat pattern is always a classic. Fainting goats of all sizes are typically stocky and shorter in stature than other meat goats.  The body is wide, full, and deep, with heavier than average muscling evident throughout.  They typically have a straight profile, as opposed to the roman nose favored in Boer goats, and prominent (bug-eyed) eyes.  That sounds terrible but is really very cute, think pug eyes.  This head profile combined with a horizontal and slightly forward ear position is unique to the Tennessee Fainting goat.

They are alert, good-natured animals with a conformation that is smooth, functional, and rugged. They are also generally quiet, and are much quieter than many other breeds of goats. Parasite-resistance is another trait that the breed is renowned for.  – Myotonic Goat Registry

Surprise!  It is not really a faint at all but refers to the breed characteristic known as myotonia congenita.  This is a condition that cause the muscles to experience an extended contraction when the goat startles.   That contraction causes general stiffness that can make the goat fall over.  Particularly if the goat is in motion when it occurs.

In fact, fainting goats don’t actually faint or lose consciousness at all during these episodes. The question I usually get immediately after the goats recover is whether or not the feel any pain associated with the muscle contractions.  Common knowledge, the scientific articles I have found and personal experience say no.  They do not suffer pain when they stiffen up and after a few seconds will recover and be on their way.  Most often the goats display only a stiffening of the limbs and may totter or rock in an effort to move, they typically only fall over if caught off-balance as they stiffen up.  And the more they stiffen up the better they seem to get at imitating your kitchen table.

The condition’s severity varies. Some fainting goats will stiffen up every time they’re startled, others less often.  Symptoms often lessen over time and some animals are able to better adapt to the condition. Younger goats are more prone to fall over and tumble when startled.  But, as the goats grow older, many eventually manage to avoid falling down altogether during an episode. They simply run away from a threat on stiffened legs. Older goats also tend to become more secure with their environment and startle less easily. -http://science.howstuffworks.com/

For a good source of additional information visit the science.howstuffworks.com website

Why Fainting Goats as a Breed?

Well aside from the entertainment of their unique condition, Tennessee Fainting Goats make excellent pets.  They are traditionally easy keepers and are gentler than many other goat breeds.  A Fainting Goat is less likely to re-enact Houdini like escapes or sleep on top of your car than other goats.  Their myotonia seems to limit their athleticism and keeps them more ground bound.   Tennessee Fainters are very docile by nature and are easily tamed with treats and petting.  In my experience, the wethers make the best pets and will often be as affectionate as a lap dog.  Does seem are by nature more cautious and while many bucks are as friendly as a lap dog for most of the year, you will not want him in your lap, particularly during rut.

They are very inquisitive by nature and will often come to investigate visitors to their pasture.  A new pile of dirt, a fallen tree limb or a cut off stump are endless sources of entertainment; and Heaven help any stray buckets.

These goats are also often used in meat goat-herd improvement programs because they have a hardier constitution and a more docile temperament than other meat goat breeds.

I love it when you share, but if you do, please link back to the original post.
This site's content is for informational purposes only and Fainting Fox Farm or others associated with this site shall not be held liable for any damages incurred through the use of information provided in this blog. I am not a vet, information provided is from personal experience and study. It is not intended to replace professional veterinary or medical advice and it is your responsibility to seek appropriate medical and vet advice as needed.
Follow on Instagram
This website uses cookies to improve your experience. We'll assume you're ok with this, but you can opt-out if you wish. Cookie settingsACCEPT Read More
Privacy & Cookies Policy