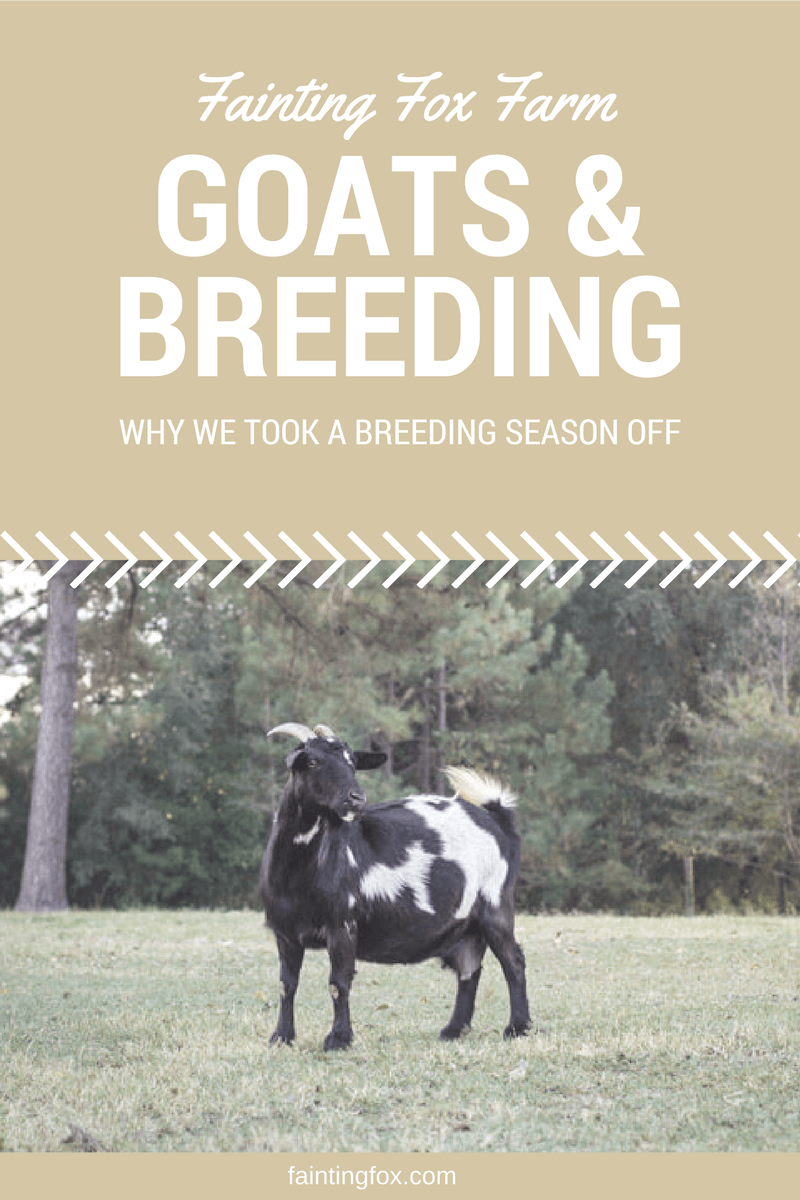 Goats and breeding, when does it make sense to take a season off?

Kid sales are the lion’s share of profits for our small goat farm.

I use the money from the sale of our kids to do things like make farm improvements and purchase new breeding stock.  So that every year our profits are improving our operation.

But this year I skipped breeding season.

At first glance it doesn’t make much sense does it?  After all, no kids, no profits, no improvements.

So why take a year off?  The simple answer: We needed it.  All of us.  The goats and me.

There were several reasons, none of them a huge issue on their own, but taken all together I really started to feel that the best response for us this year was to take a breather.  It was a tough decision because we love the babies and because I think it is important for the goat operation to sustain itself.  Not selling kids this year means that for the next year goat related expenses will be coming out of our general household finances.  It’s not ideal and not how I prefer to operate, but thankfully, because I do still work a ‘day’ job I have that option.

For those of you who rely on farm sales as your sole source of income this is probably not a good option for you.  But if you are having similar struggles, consider rotating does for a season or two.  Give half or 1/3 a season off to catch up and swap them out for active does the following season.  For me, because of our fencing situation, I benched the whole herd.

So, the reasons we took a season off.

I felt that the does needed a chance to catch up.  A recovery period of sorts.

Repeat breeding every year takes a toll on a doe’s body.

With every pregnancy, a doe converts her fat and muscle stores into energy for her kids.  And after their birth she continues to expend energy producing milk and caring for her kids.

In a typical year, the time between one pregnancy and the next is when the does replenish those stores and prepare for the next year’s kids.  But this year I noticed that a couple of my older does weren’t bouncing back as quickly as normal.  One or two does, especially older does, not recuperating as quickly as normal wouldn’t normally be enough to convince me to take a season off.

But, we also had a terrible year for the pasture.

A combination of too little rain, too much rain all at once and an invasion of armyworms all wreaked havoc on our spring and summer pastures.  So, my cheapest most available source of forage was wiped out.  The entire herd spent the spring and summer on coastal hay and Chaffhaye with supplemental feed.  And while they do fine on this diet it’s just not the same as pastures full of rich spring and summer grasses.  I wasn’t looking forward to the increased feed bill during breeding and pregnancy.

Not too many total, but too many at different stages of life.  I had several junior does this past year that I wasn’t ready to breed.  I had the two older does that I weren’t sure needed to be rebred this year.  And I had two junior bucks and two mature bucks.  Once I started doing the math I had more goat groups than I had pastures.  Especially since I have been tearing down and replacing fences while implementing my farm master-plan.

Stomach worms were terrible this year.

I prefer to run a parasite resistant herd.  Goats that are naturally resistant to worms and respond well to available wormers.  I consistently check using the FAMACHA method and treat as needed.  Goats that are susceptible to worms are culled.  Overall this makes my entire herd stronger and more resistant.  But every herd has some level of worms and fecal tests are the only way to see exactly how high worm levels are in a herd.   Throughout the year, I run regular fecals and check in with my vets about what they are seeing in our area.

This past year my vets were seeing a real problem with stomach worms in our region.  The FAMACHA and fecal tests stayed pretty good for my herd, but I did see an increase in worm load in the fecals.  Not enough to cause a problem for the goats while they were just maintaining.  But the combination of too little pasture and the stresses of breeding and pregnancy combined with a higher worm load had the potential to create a perfect storm of problems.

I had too much else going on.

Does that sound terrible?  It’s the truth.

On top of all the reasons above, my life was just nuts this past fall.  I was swamped at the day job, we were building chicken coops and pens and working on fences, I was reformatting the website, working as the volunteer livestock club leader for 4-H, coordinating a fundraiser, the human kid was playing sports and showing 4-H and we had holidays and some travel planned.  Life was crazy.

And ask any breeder and they will tell you that while we LOVE the babies.  Who wouldn’t love all that bouncing cuteness?  Kidding season is probably the most stressful time of year for a breeder.  You worry over those does and kids like they were your own children.  There are late nights and early mornings waiting impatiently for births, assisting when necessary and checking on kids’ morning, noon and night until they go home with their new owners.  Breeding season equals kidding season and kidding season can be stressful.

With the craziness of my life this past fall plus a stomach worm uprising, failed pastures, too many goats and slow does; taking a breeding season off made sense for all of us.  It will be harder on the pocket-book but in considering the profit versus loss I think sanity trumps dollars.

So, was it worth it?

We are now a couple of months past breeding and kidding season and I am so glad I decided to take a season off.  The girls look better than ever, the pasture is recovering and we have had time to complete some of those fence and coop projects.  2017 is shaping up to be a good year.

Although, I freely admit to some jealousy when I see everyone else’s cute new kid pictures.

What about you?  Have you ever decided to take a season off?

This error message is only visible to WordPress admins

I love it when you share, but if you do, please link back to the original post.
This site's content is for informational purposes only and Fainting Fox Farm or others associated with this site shall not be held liable for any damages incurred through the use of information provided in this blog. I am not a vet, information provided is from personal experience and study. It is not intended to replace professional veterinary or medical advice and it is your responsibility to seek appropriate medical and vet advice as needed.
This error message is only visible to WordPress admins